The project: “Chiprovtsi carpets, world cultural heritage – fortune of the generations”, with Ref. № 9290118181РРЕ was approved for funding and implementation by the UNESCO 2018-2019 Participation Program. The two non-governmental organizations have pledged to implement a number of events, respecting the main goals and directives of UNESCO. Most of the events are planned to be implemented in the town of Chiprovtsi.

Nestled at the foot of Western Stara Planina Mountain, on the border with Serbia is the town of Chiprovtsi. There are few inhabitants in this city, but the glory of this ancient Thracian settlement is worn all over the world because of the world-famous, hand-woven Chiprovtsi carpets. 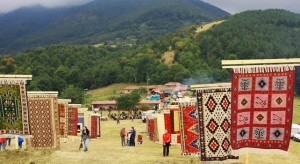 The remoteness of the town of Chiprovtsi from the interior of the country has been and is at the core of creating, preserving and preserving the technology of workmanship and colors, and keeping the figures so original. The production of Chiprovtsi carpets, for centuries, skills and knowledge, were passed on by adults to the younger – children and grandchildren. Not only the skill of weaving, but also the previous dyeing of materials – the coloring through traditional and natural dyes, as it is today. It is a cultural phenomenon that fits in the cultural landscape in the natural landscape, with the participation of a larger part of the population, regardless of the gender difference.
Carpeting is a living example during the centuries of gender equality, one of the two global goals of the UNESCO World Organization. Men also participate, but only when providing the basic material – the wool and the dyeing materials. The weaving of old women’s carpets in Chiprovtsi has become a personal cause, a way of life. Many women now refer to this occupation as a very personal matter, and to their carpets – as family treasures. The same women diligently surrender their skills to younger women, to their grandchildren, but not to the idea of giving them knowledge of a profession, but rather to the feeling of dedicating them to a family secret, a sacrament that keeps the home and the good people around the world. The weaving of carpets, composed of complex geometric motifs and geometric shapes, is a symbolic world – the world of ornamentation.

Two types of waves were used and used in the production of Chiprovtsi carpets: “RUNOVA” obtained in the spring and “TABASHKA”, obtained after the treatment of the skins. Another material is the coat from which the base of the carpets is prepared.

Here is what Mrs. Savka Ivanova, one of the most famous craftsmen of making and weaving in Chiprovtsi carpets today, says: “We put a lot of love in the carpets, so when they look, they emit a light, a happiness. When you put them in the house, they shine like a sun, because everything is from living material. We have to keep the tradition and move it forward”. 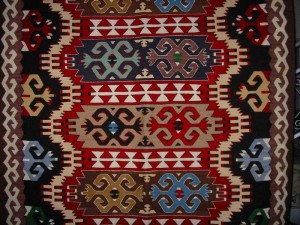 Chiprovtsi carpets fascinate with their beauty and grace, with perfection and simplicity, with the marvelous combination of colors and signs. Carpets reveal the world of their creators, a world of harmony, wisdom and kindness. The aesthetics of the Chiprovtsi carpets with their misaligned elements and compositions, the strong element of improvisation, the richness of symbolism and the emotional expression are the basis of the received worldly recognition.